So you’re dirt tired, you can hardly see straight and you haven’t had time to brush your teeth for…who knows how long. You’re afraid if the neighbor sees you she’s going to think zombies have invaded your house, BUT you decide to go ahead and read that huge sleep book sitting on your shelf because you CANNOT go on living like this. But guess what. That book you just spent every last free second reading turns out to be exactly what you weren’t looking for! Not only was it a waste of money, but it was a huge waste of time (especially because many authors take hundreds of pages to get to their point!). I mean, you can hardly find time to make it to the bathroom, you don’t have several extra hours to read a book that turns out to be about CIO when you aren’t interested in CIO–or vice versa.


Time and energy is not something you have much of right now. So I hope the below list will be a super duper quick version of the top sleep training methods for you. I’ll link to the book review if I’ve done one, and I’ll eventually get to adding all the reviews. My guess is that you can get most of these from the library, but I’ve also listed where you can buy them too (I found them all on amazon, which is where I generally find the best prices).


Keep in mind that although I’m listing these books under a sleep training approach, this is just the method suggested IF your child continues to have sleep issues after following their other recommendations (which often include suggestion like the ones on my setting the stage for good sleep post).


Some additional posts that may be helpful while choosing a sleep training method:

Intermediate or Middle Ground (may be crying, but you are in baby’s presence)

Other books I’ve reviewed that include a little bit about sleep but it isn’t the main topic: 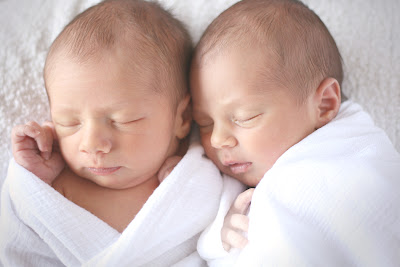 You know how sometimes time goes so slowly, but it goes by quickly as well? This is one of those times. It’s hard to believe a month has passed.

Routine
They are both still eating around 3 hours during day. They wake up for their feed about half the time (almost always on the 3 hour mark–it’s amazing!) and Sharon wakes them up for a feed the other half of the time. Sometimes they’ll wake up earlier than 3 hours, but so far it seems to be a sleep issue, not a hunger issues, and she is able to get them to go back to sleep with a little help. If they were hungry before 3 hours, she would feed them. She is following the PDF method and EWS routine and encourages full feeds. She mainly follows the baby whisperer’s methods right now, although she isn’t as worried about sleep props as the Hogg is. She does what she needs to do to ensure her babies get enough sleep and that she doesn’t get too overwhelmed.

At night, they usually go 3 hours at first then she wakes them for a feed. After that, they usually sleep 5 hours (followed by a feed) then 4 hours then it is time to get up for the day. I know, pretty awesome for a month old, especially twins. About every other night one of the twins will have sleep difficulty at night. Sharon generally holds them or puts them in a swing (if it’s Jude, Luke hates the swing right now) and they fall right back asleep. If they didn’t fall back asleep easily, she’d consider that they were hungry and feed them, and the other twin, sooner than usual.

Eating
Eating is going well. Sharon got mastitis which made life pretty horrible for a few days. She took antibiotics which cleared it up (yes, I asked her if it was ok to mention this–we’ve been discussing these posts and what to write, she’s just too busy to write them herself). She’s also had issues with blocked ducts. If you’ve had those, you know they are pretty painful. A heating pad has turned out to be the most helpful thing for her with these.

The twins have both gained weight well, even a little above average (which is pretty normal for the nephews/nieces in my family whether breast or bottle fed). My sister’s comment after we weighed them last was “who says you can’t breastfeed a baby on a schedule and have them thrive–and I’m feeding two!” Exactly.

Sometimes they will get fussy during their bedtime and late evening feed. Usually offering a pacifier for a minute will calm them down then they’ll eat.

Luke always takes longer to eat even though he is the lighter of the two twins. Shows you how different all babies are. 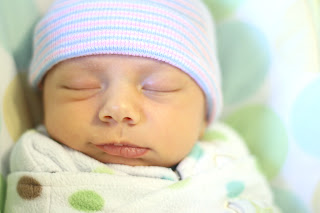 Sleeping
Jude is a better sleeper than Luke  He settles more easily and stays asleep longer without help. But his digestive tract is also a bit more sensitive so you can’t have it all 🙂  Luke gets overstimulated more easily and swaddling seems to especially help him settle down before sleep–the tighter the better. Sharon uses a halo swaddler right now. It’s been keeping them swaddled well most of the time and it’s pretty quick to put on–important when you’ve got two you’re trying to swaddle and get to sleep. She’s also a fan of the miracle blanket. They sleep in the newborn rock and play sleeper much of the time still. This bed is pretty common for single babies, but I’ve found it is really common (and a bit of a life saver) for multiples.

Sharon isn’t doing cluster feeding in the evening. Trying to fit that in with two babies while taking care of other children and dinner is too difficult. Neither baby has seemed to be hungry sooner (except for a few rare occasions) so she hasn’t worried about it. She is sort of doing the DF around 10:30, although it is more like a normal feed than a sleepy feed. 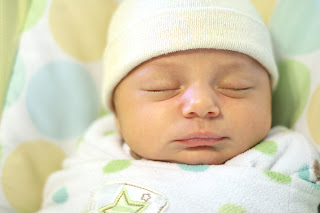 They’re usually up as long as it takes Sharon to feed them, change their diapers and put them back to sleep. So like an hour. If one of them spits up all over his clothes (likely Jude!) or poops twice it takes longer. She’d like to consider waketimes more, but she can only move so quickly with two babies so she does the best she can.

Evening Fussies
Yes, they’ve got them, the evening fussies. Luke has especially gotten fussy the last couple weeks, although the fussiness level seems to vary from day to day. Sharon and her husband/friend/family member usually spend their evenings holding the babies from their bedtime (7:30 ish feed) to late evening (10:30 ish) feed. Sometimes they’ll surprise her and sleep well during this time, but she doesn’t count on it. If she’s holding them, they will sleep OK. They often fall asleep for a few minutes, start to get fussy, are calmed back to sleep and repeat.

After the late evening (10:30) ish feed, they seem to go to sleep half the time and half the time one of them will be fussy and need some help for some time before going to sleep for his longest stretch of sleep at night.

How is mom doing?
Sharon’s emotions have been doing pretty well. She’s had a couple days where she started to feel pretty overwhelmed but overall it’s been ok. She’s tired, but she doesn’t feel so tired that she’s unable to function half decently. She tries to take a short nap or two a day when she can which helps tremendously. She’s still pretty hesitant to leave the house by herself with all her kids. It’s hard to manage a toddler and baby twins at once at home, but away from home is another story. Life right now is one cycle after another. Feed baby, change diaper, put to sleep, repeat. She’s trying to enjoy her babies while they are little, but at the same time, she’s a little excited for when this phase is over with 🙂

On a side note, she’s found that the twins are much easier and less stressful for her than her first baby was. Not only was she a first time mom then (which is really stressful for many of us–myself included), but her oldest was a very difficult baby and always fought sleep. I’m mentioning this as a reminder that every baby is different and some are much harder to take care of than others, even if you are doing an amazing job (which, you likely are). Yes, your neighbor’s child may sleep like an angel and always be smiling, but that doesn’t mean your neighbor is doing anything better than you are with your sleep resisting, fussy newborn. Babies, parents, life situations etc are different, and that can make all the difference in the world.

You can check out Luke and Jude on Week 1 here.